Covid cases have started to climb once again, with more than half a million people testing positive over the last week.

This works out to roughly one in 11 people in Scotland, one in 16 people in England and Wales and one in 17 people in Northern Ireland.

Although still a long way off the record number of cases seen only in January this year, the current rates are still among the highest seen throughout the pandemic, and are particularly affecting school children and hospital staff.

Yet, self-isolation rules for positive cases were dropped last month and travel rules have been completely relaxed for UK arrivals as the government pushes its living with Covid agenda.

What’s behind this latest spike and just how worried should we be?

According to the World Health Organisation, it accounts for close to 86% of all sequenced cases and has surpassed its predecessor, the original Omicron variant, which swept across the world in late 2021.

Vaccines are likely to be less effective against this new strain as a result.

People testing positive for Covid-19 in private households in the UK.

It’s known that protection from the vaccines wanes over time.

With the majority of the population receiving their Covid boosters in the government’s accelerated program between December and January (to tackle the first strain of Omicron) it is likely that vaccine efficacy has started to fade.

It’s thought this has triggered the sudden increase in hospitalizations for people with Covid. Admissions in south west England are higher than they were in January with the first Omicron infection wave, although it’s important to note this is not the case across the UK.

A fourth Covid vaccine is now being rolled-out to over-75s, care home residents and and those aged 12 years and over with a weakened immune system.

It has to be three months after your third dose, and you will be notified by your GP when you become eligible. 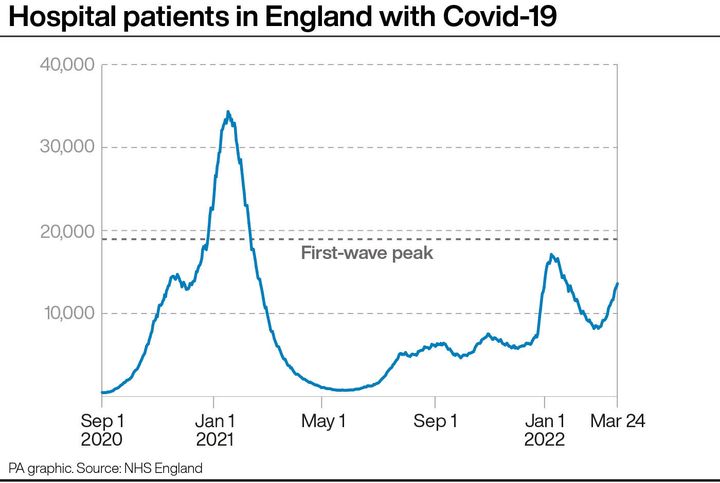 Hospital patients in England with Covid-19.

With relaxed social distancing rules and the removal of the mask-wearing mandate in England and Wales, the general population is mixing more, making it easier for viruses to pass from one person to another.

This is part of the government’s “Living with Covid” strategy, but concern has been raised about whether the UK is ready for life to resume without restrictions.

4.Are we testing more?

The high Covid rates are actually not linked to an increased amount of testing among the general public.

If anything, since the government announced lateral flow tests will no longer be free from March 31, testing numbers have dropped.

The government’s data shows there have been 5,023,854 tests conducted and registered online between March 20 and March 27.

This is a decrease of 2.2% from the previous week and shows testing rates have returned to levels last seen around August 2021.

So… should we be worried?

The government has repeatedly said there is “no cause for concern” when it comes to Covid infections.

There have been fewer hospitalizations compared to the waves of Covid experienced in March 2020 and January 2021, although numbers are creeping up to the very high figures seen in January 2022.

Even so, the number of deaths is still considerably lower than those witnessed during previous Covid waves. 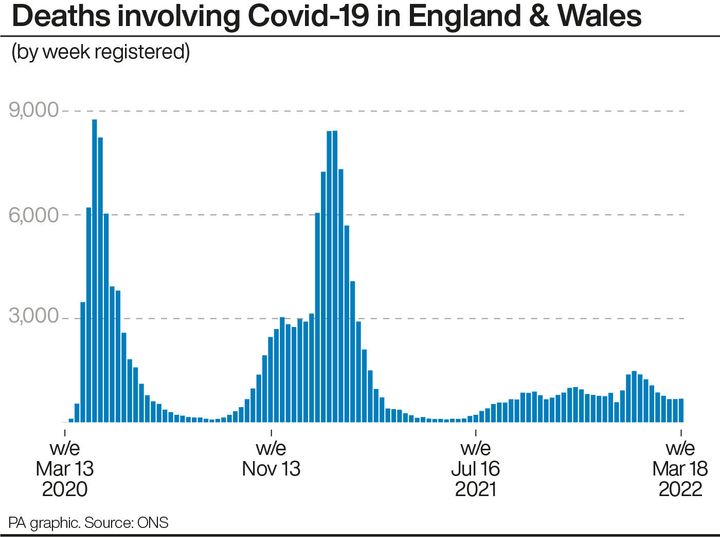 The spring vaccine booster program should also help protect more vulnerable people against Covid – but that doesn’t remove the risks from the virus completely.

As retired consultant in communicable disease control Dr Peter English previously told HuffPost UK: “We know that vaccination reduces considerably your chances of being infected but it doesn’t eliminate it.

“But it does mean that you’re less likely to be symptomatic if you do get infected. So there might be more asymptomatic people.”

Long Covid is also still a pressing concern, meaning catching the virus can have significant long-term consequences even for those who aren’t hospitalised.