UK aid spending on girls’ education around the world is expected to be cut by a quarter a priority for Boris Johnsonsaid a charity.

Foreign Secretary Dominic Raab, in a statement before Parliament, was accused of “sneaking out” the details of how the Foreign Office (FCDO) would allocate £ 8.11 billion of the aid budget – 80% of total spending – over the next year.

He did not reveal how much had been cut, but Save The Children’s analysis of spending allocations for 2021/22 suggests that spending on girls’ education would be reduced by 25% compared to 2019/20.

The charity also estimated that spending on humanitarian preparedness and response would be reduced by 44%.

While directly comparable numbers are difficult to find, the Commons International Development Committee (IDC) estimated the similar magnitude (41%) of cuts in humanitarian preparedness and response separately.

Spending on Covid and global health should increase 12% compared to 2019/20 but be 14% lower than last year, Save the Children said.

The charity relied on the numbers from the FCDO’s reporting to the International Aid Transparency Initiative and used educational projects labeled “Gender Policy” to get the numbers on girls’ education.

The cuts were said to have shattered the government’s reputation as an international leader in assistance.

Here’s what @ DominicRaab’s statement about #UKAid doesn’t say – the size of the cuts for some key sectors.

Humanitarian aid has fallen by almost half since the pre-pandemic and girls’ education has fallen by a quarter, despite being a “priority”. pic.twitter.com/E00ALeS4LF

The IDC said the education of girls who received the second lowest ranking by subject area was “disappointing”.

This came after the UK abandoned its obligation to spend 0.7% of national income on foreign aid and reduced it to 0.5%.

The government is trying to cut the cuts without holding a parliamentary vote and faces defeat by the rebel Tory MPs.

Commenting on Raab’s statement, Kevin Watkins, CEO of Save the Children, said: “UK humanitarian aid was cut by almost half before the pandemic and girls’ education, despite being a stated priority for the Prime Minister, came to an end a quarter have been cut.

“If every other G7 nation steps up in the face of a global pandemic and steps up their support for the poorest and most vulnerable, Britain alone will choose to step down, even as it prepares to host the G7 summit.

“These cuts will cut borrowing in the UK by a fraction, but destroy life in many of the world’s poorest countries.”

IDC Chair Sarah Champion said, “Getting a written statement out at the end of the day shows a lack of respect for both Parliament, which is considering these cuts, and for the aid agencies, which are only now hearing about the spending for the first time.

“To say the statement is barely detailed is an understatement. While we now have a limited understanding of the areas the government is prioritizing for its shrinking bailout, we are still waiting for guidelines on country-by-country allocation.

“People’s lives are directly affected by these choices, and it’s shocking that they still don’t have the clarity they need.”

The Rotherham Labor MP also said the committee “strongly condemns the extent of the aid cuts”.

“With our economy going to rebound strongly this year, the logic behind the cuts in the world’s poorest over time makes less sense,” she said.

Former Tory International Development Secretary Andrew Mitchell said: “These words hide the most draconian cuts Britain has ever made and they affect many countries where Britain has a deep and lasting relationship.

“There is little detail, but we know the cuts are close to 50%.

“This is a statement that should have been made to MPs in the House of Commons rather than coming out in a written notice at the end of the day.” 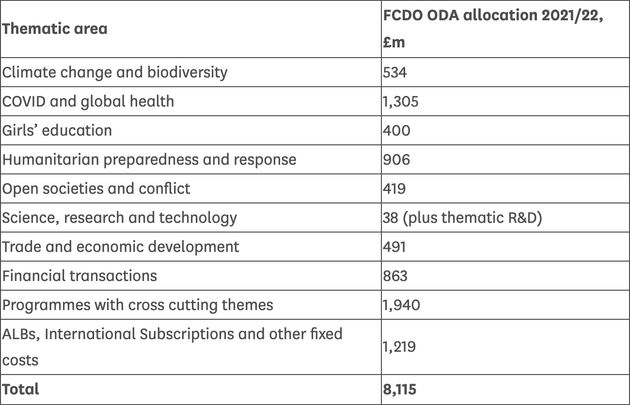 In his statement, Raab also revealed that aid to China will be cut by 95% to less than £ 1 million, although Champion said the fact that the country was getting money was “disappointing”.

“The resulting portfolio represents a strategic shift in which our aid budget is used alongside our diplomatic network, our scientific and technological expertise, and our business partnerships in addressing global challenges,” he wrote.

“We’ll focus on the core [government] Priorities for poverty reduction, including getting more girls into school, urging humanitarian aid to those who need it most, and addressing global threats like climate change, Covid recovery and other international health priorities.

“Based on OECD 2020 data, the UK will be the third largest donor within the G7 as a percentage of GNI [national income]. ”

Sam Nadel, Oxfam’s chief political and legal officer, said: “For millions of people around the world, today’s announcement means no clean water, no food when they are hungry, and no medicine when they are sick.

“Ministers should urgently reconsider this and keep our promises to the world’s poorest affairs more than ever amid a global pandemic.”

Anti-poverty organization One said the announcement “makes it clear that the government’s words are inconsistent with actions”.

British director Romilly Greenhill said: “The cuts show a government making bold statements about the importance of investing in girls’ education and preventing future health emergencies from a pandemic and in the same year we will hold major summits on these issues .

“The promised new era of British leadership will be very difficult to tackle as we turn our backs on the world’s toughest challenges.”

James Corden will get a shock when he provides Oprah an impromptu cellphone name on the late, late present

The psychology behind why our inexperienced habits have modified