The Duchess of Sussex recently debuted her long-awaited Spotify series, in which she and a celebrity guest discuss different stereotypes and archetypes that women have been used to describe women throughout history.

So far, Meghan has interviewed Serena Williams, Mariah Carey and Mindy Kaling, but announced on Monday that she would not be releasing more episodes of her podcast until the “official mourning period” for Queen Elizabeth II is over.

A message on Spotify said: “New episodes of Archetypes will be paused during the official mourning period for Her Majesty The Queen Elizabeth II.”

Meghan Markle and the Queen laughing in 2018

The period of “royal mourning” will continue until seven days after the Queen’s funeral, which is set to take place on Monday 19 September.

It was previously teased that future installations of Archetypes would include interviews with Constance Wu, Issa Rae, Lisa Ling, Margaret Cho and Ziwe.

Meghan’s statement comes days after she and her husband Prince Harry joined Prince William and Kate Middleton, the newly-appointed Prince and Princess of Wales, in greeting mourners at Windsor Castle over the weekend. 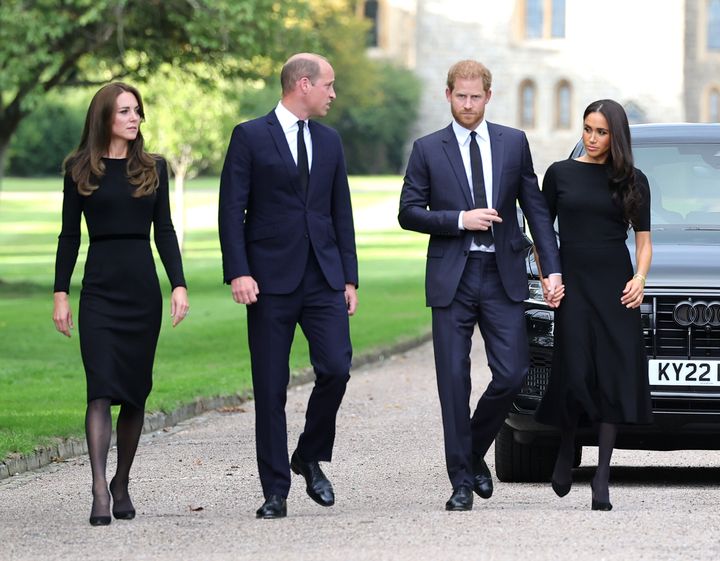 Paying tribute to his late grandmother on Monday, Prince Harry said: “Granny, while this final parting brings us great sadness, I am forever grateful for all of our first meetings—from my earliest childhood memories with you, to meeting you for the first time as my Commander-in-Chief, to the first moment you met my darling wife and hugged your beloved great-grandchildren.”

“Thank you for your infectious smile. We, too, smile knowing that you and grandpa are reunited now, and both together in peace.”