Former supermodel Linda Evangelista has said she is “not going to hide any more” after taking part in her first photoshoot since claiming cosmetic surgery left her “brutally disfigured”.

The 56-year-old Canadian fashion star, who was a regular fixture on the catwalk and magazine covers in the 1990s, claimed in September that she had been left “permanently deformed” after developing paradoxical adipose hyperplasia (PAH).

PAH is described as a rare and adverse effect of CoolSculpting or cryolipolysis, when fatty tissue grows instead of shrinking in response to the procedure.

She said it had “destroyed my livelihood” and sent her into “a cycle of deep depression”, which has led to her becoming a recluse.

In a new interview with People magazine, Linda says she is “not going to hide any more.”

She told the magazine: “I loved being up on the catwalk. Now I dread running into someone I know.

“I can’t live like this any more, in hiding and shame. I just couldn’t live in this pain any longer. I’m willing to finally speak.”

Linda said she began noticing bulges around her chin, thigh and bra areas three months after the treatment, and began dieting and exercising more in a bid to reduce their size.

She said: “I tried to fix it myself, thinking I was doing something wrong. I got to where I wasn’t eating at all. I thought I was losing my mind.”

The former model eventually went to the doctor in June 2016.

Linda with George Michael and during the Too Funky video shoot circa 1992 in Paris, France. (Photo by Kevin Mazur/Getty Images)

Recalling this meeting, she said: “I dropped my robe for him. I was bawling, and I said, ‘I haven’t eaten, I’m starving. What am I doing wrong?’”

Describing being diagnosed with PAH, she added: “I was like, ‘What the hell is that?’

The model claimed that if she walks without a girdle in a dress she has “chafing to the point of almost bleeding”.

She said her posture has also been affected because she can no longer “put my arms flat along my side.”

She added: “I don’t think designers are going to want to dress me with that”. 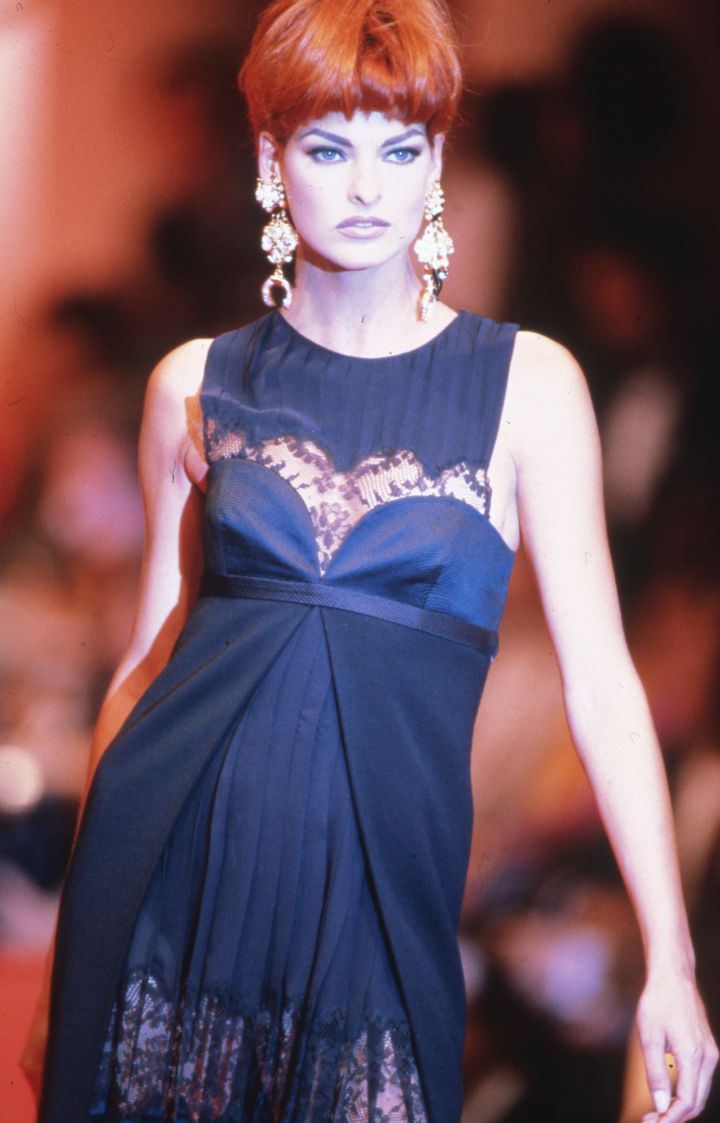 Linda Evangelista walks the runway at the Versace Haute Couture Fall/Winter 1991-1992 fashion show during the Paris Fashion Week in July, 1991 in Paris, France. (Photo by Victor VIRGILE/Gamma-Rapho via Getty Images)

CoolSculpting is the brand name for cryolipolysis, a popular fat freezing procedure, which cools the fat so that frozen, dead fat cells can be excreted out of the body through the liver.

The CoolSculpting website said it is used for “treatment of visible fat bulges in the submental (under the chin) and submandibular (under the jawline) areas, thigh, abdomen, and flank, along with bra fat, back fat, underneath the buttocks ( also known as banana roll), and upper arm”.

The website also warned that “rare side effects may also occur”, and “may cause a visible enlargement in the treated area, which may develop two to five months after treatment and requires surgical intervention for correction”.

Linda, along with the likes of Naomi Campbell, Cindy Crawford and Christy Turlington, became known as “supermodels” during their heyday because of the huge fees they could command for a day’s work.

Zeltiq parent company Allergan has been contacted by HuffPost UK for comment.

COVID could have made us much less materialistic – new analysis