The Night’s Watch needs to up its game at the Wall because the trolls are coming, Emily Carey.

The British actor who portrays Alicent Hightower in the new Game Of Thrones prequel House Of The Dragon, has revealed in an interview with News.com.au that she deleted her Twitter account due to a backlash she received when after she said that she felt her character Alicent was more nuanced than some fans would have liked.

“Any hate that comes in, it’s just … It’s a person behind a screen. You just have to move on from it.”

“But I will say I did delete Twitter [after Comic-Con] because it’s just so loud. Even when it’s good, there’s so many and it’s so loud.

“I love the buzz, don’t get me wrong, but sometimes it can be overwhelming, and that’s me being completely transparent.”

Carey attends the “House of the Dragon” premiere earlier this month.

House Of The Dragon — which takes place nearly 200 years before the events in Game Of Thrones — is based on George RR Martin’s book Fire & Blood, which is a history of the fictional House Targaryen.

It should be noted that House Of The Dragon covers only one portion of the family’s centuries-long history — leading up to the civil war known as the Dance Of The Dragons.

The book also reads somewhat like a textbook, in which an omniscient narrator gathers the history of House Targaryen from various sources including maesters, septons, works of literature and a guy whose name is Mushroom — and these accounts tend to conflict with one another. Thus, there are various versions of events that the show could potentially pull from.

Alicent is older in the book than she is in the show. In the series, Alicent is portrayed as a close childhood friend of the main protagonist, Princess Rhaenyra Targaryen (Milly Alcock), which isn’t the case in the book.

During her appearance at this year’s Comic-Con in July (above), Emily spoke about coming up with the backstory for Alicent and expressed, “I’ve never had the freedom to create a whole human being like this before. So it was so much fun being able to go so in depth with her.”

She added: “I think she’s so multifaceted. There are so many layers to her. I think lots of people are already expecting her to be the villain of the show, but I think bringing her in younger, there was a lot more to explore.”

Apparently, fans of the book didn’t like Emily’s more empathetic approach to Alicent — in part because she eventually becomes a rival for Rhaenyra. So, some fans started harassing her online. 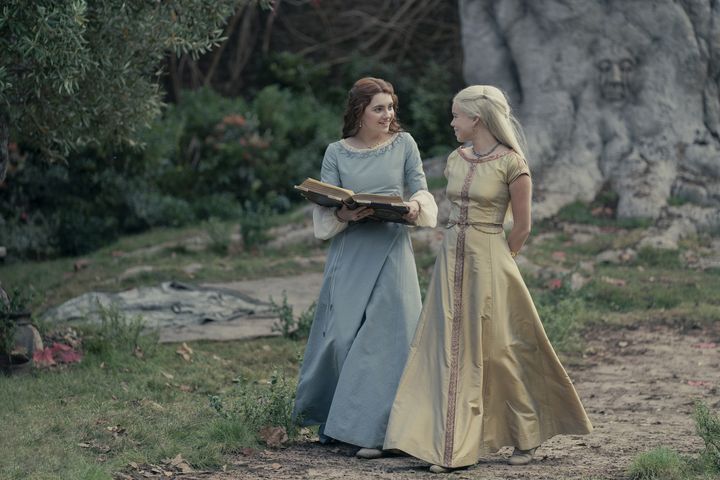 Carey as Alicent and Milly Alcock as Rhaenyra Targaryen.

News.com.au notes that, at the time of the backlash, the young actor wrote a since-deleted tweet that read: “I stand by what I said in the panel. Alicent is not the villain, folks. When we meet her she’s a child, a product of the patriarchy. Just you wait and see. Maybe you’ll sympathize.”

Emily told the outlet that, although she needed to “switch off for a bit” for the sake of her mental health, she’s also noticed a silver lining.

“Post Comic-Con there was a lot of noise, but what’s really lovely is a lot of fans noticed that I switched off Twitter and have come to me on other platforms that I use more often and have messaged me making sure I’m OK ,” she said.

“So I’m definitely feeling the positive vibes from it now, which is really nice.”