Queen Elizabeth II’s coffin has arrived at the Palace of Holyroodhouse after a six-hour journey from Balmoral Castle.

The cortege arrived in Edinburgh shortly after 4pm where the Queen’s coffin will rest overnight in an oak-paneled throne room.

Her coffin was greeted with a guard of honor before being carried into the palace.

Three of the Queen’s children looked on – Princess Anne, Prince Andrew and Prince Edward – as the coffin crossed the threshold.

Members of the public watch the hearse carrying the coffin of Queen Elizabeth II as it is driven through Edinburgh.

Meanwhile, thousands of mourners lined the streets of Scotland’s capital city on Sunday to pay their respects. Some observers clapped as the hearse came past, others threw flowers in the road.

Earlier on the 180 mile journey, the hearse passed crowds of people, shops with photographs of the monarch and even a guard of honor with tractors. 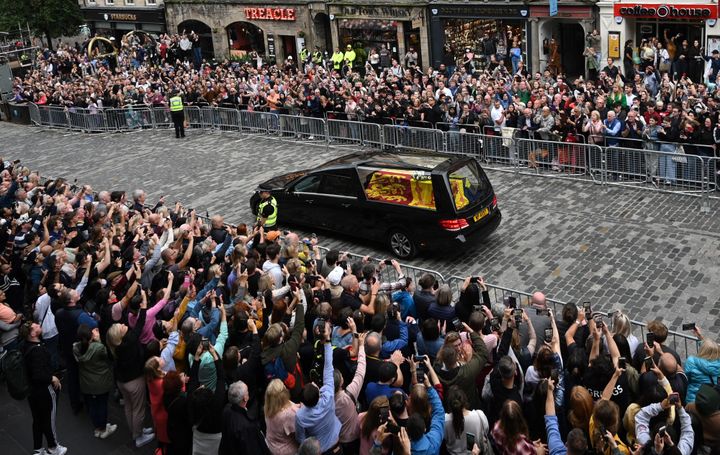 Members of the public watch the hearse carrying the coffin of Queen Elizabeth II as it is driven through Edinburgh.

The Queen died at Balmoral Castle in Aberdeenshire on Thursday where she traditionally spent her summers.

The monarch started the journey to her final resting place just after 10am, with her only daughter the Princess Royal and her husband Vice Admiral Sir Tim Laurence in the procession traveling directly behind. 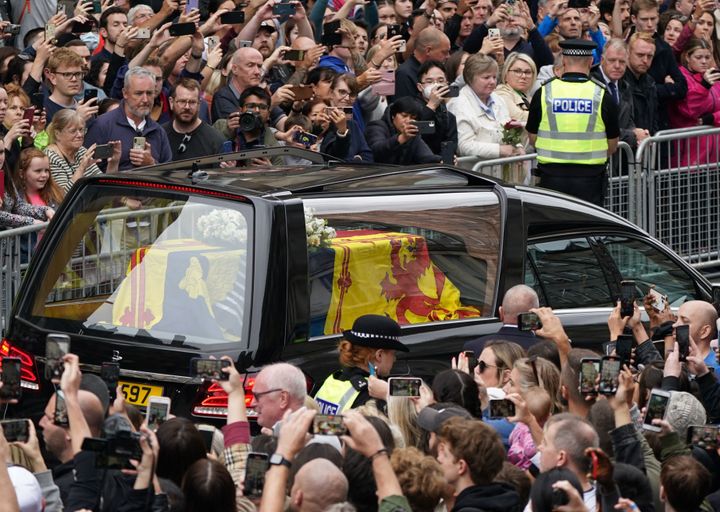 The coffin of Queen Elizabeth II, draped in the Royal Standard of Scotland, driven through Edinburgh.

The coffin was draped with the Royal Standard of Scotland and a wreath on top, made from flowers from the Balmoral estate including sweet peas – one of the Queen’s favorite flowers – dahlias, phlox, white heather and pine fir.

Floral tributes were thrown into the path of the coffin as thousands turned out to pay their respects.

A single motorbike police outrider led the way as the hearse, followed by six vehicles, traveled at a stately pace through the Scottish countryside.

Farmers have positioned their tractors to form a guard of honor for the late Queen Elizabeth II as she passes through Aberdeenshire on her way to Edinburgh. pic.twitter.com/oDt8gs2bPR

As the Queen left Balmoral this morning, Scottish First Minister Nicola Sturgeon said it was a “sad and poignant moment” as she left her “beloved Balmoral for the final time”.

Sturgeon added: “Today, as she makes her journey to Edinburgh, Scotland will pay tribute to an extraordinary woman.”

Meanwhile, down in London, King Charles III was greeted by thousands of well-wishers as he arrived at Buckingham Palace, where he was due to meet with representatives from the Commonwealth. 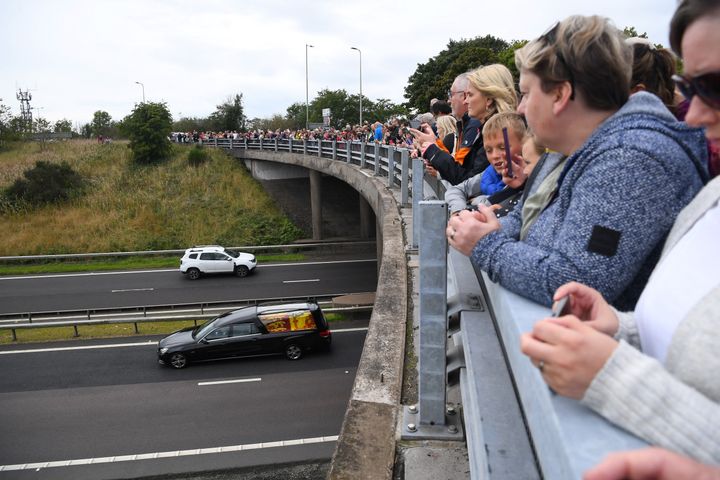 Members of the public stand on a bridge, in Kinross, overlooking the M90 ​​motorway, to pay their respects.

On Monday, there will be a procession to St Giles’ Cathedral in Edinburgh where the Queen’s coffin will rest for 24 hours.

The procession is expected to include members of the royal family.

There will be a service in the cathedral and members of the public will be able to file past the coffin. 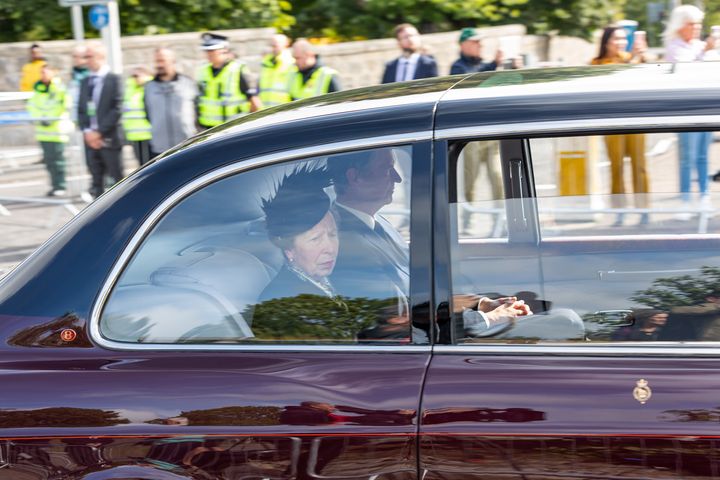 The Princess Royal and her husband Admiral Sir Tim Laurence travel behind the hearse carrying the coffin of Queen Elizabeth II.

The following day the Queen’s coffin will be transported by road from the cathedral to Edinburgh Airport and then flown to RAF Northolt.

Her coffin will be accompanied by the Princess Royal, before being moved to rest at Buckingham Palace’s Bow Room.

A procession on September 14 will see the coffin, adorned with the Imperial State Crown, transported on a gun carriage of The King’s Troop Royal Horse Artillery from Buckingham Palace to the Palace of Westminster ready for the Lying in State in Westminster Hall.

The Queen will lie in state at Westminster Hall from Wednesday.

Her funeral will be held in London’s Westminster Abbey on Monday 19 September which will be a bank holiday.